Poets who use Technology

Shane Koyczan
Animation has been around for quite a while, ever since artists discovered that they can make their drawings appear to move by creating more drawings in slightly different poses. Animation, as an art, is important in that it can move like a film, but look like a painting allowing artists to not be restricted by laws of physics or lack of funds to make everything CG. Shane Koyczan is not an animator, but a few of his works have featured animation done by fellow artists who help to establish mood and emphasize certain aspects of the poem. Coupled with the poets own voice, this creates an experience that can be very powerful as it appeals to both the visual and audio senses of the viewer as opposed to them simply reading the poem in whatever voice they think fits. An example of this would be his poem To This Day. With the use of animation and the sound recording technology of today, poets like Koyczan no longer have to rely on spacing of their words but, instead, show the viewer what the poet himself feels and sees.

Kenneth Patchen
Paint has been used as an artistic medium for several centuries. Originally, paint was made through the grinding of minerals which would be combined with oils to make, what is known today, as oil paints. The process of creating paint is time consuming and often dangerous as the dust from the minerals could cause a variety of health issues. Around the 1930's acrylic paints, which are primarily water based paints, were being developed. Water based paints were more practical as they did not dry as fast and could be modified easily just by adding water. During the 1930's, Kenneth Patchen was an American poet who often incorporated various media to create his work. Jazz music, drawings and even paints were used that would catch a person’s eye. By using paint, Patchen was able to be more expressive with his poetry and, therefore, give it more life. His poem An Interview with the Floating Man features blocks of text that are separated with what appears to be shapes of animals, as if the animals are characters in this poem. 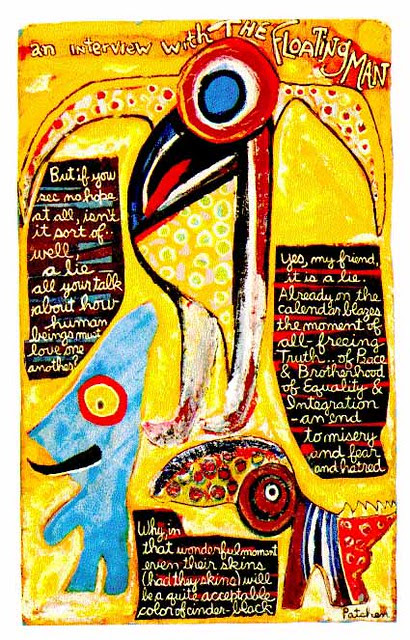 Anatol Knotek
The typewriter was an incredibly important invention for poets as it allowed them to space words and phrases evenly without requiring them to spend vast amounts of time measuring. It also allowed to explore new creative possibilities. With the invention of the computer, these possibilities of increased tenfold. The poet can now warp words, shrink letters, change fonts, colours etc. all with a click of the mouse. Anatol Knotek is an Austrian artist who creates poetry through the use of a typewriter, newspaper clippings and computer programs that are able to manipulate text. With the computer, he can create clean, precise images and still be able to make changes very easily. His poem Countdown, for example, would be difficult to create several decades before as it would take up a lot of time to make something that may not even work. With the use of computers, it opens up new ways to explore how words can be manipulated and can inspire poets to try new things.

Stephanie Strickland
Originally created so that universities could communicate with each other, the internet has spread throughout the world allowing people to access information in no time. Many people create websites of their own when they have information of their own that they want to share with others. Stephanie Stickland, like many artists of today, has her own website which features not only information about her, but also her poems. Unlike some poets, Strickland, with the help of a programmer, creates poems that not only feature visuals and sounds, but are also interactive. Many of these poems were created before the creation of many mainstream video players such as Youtube, so being able to have visuals, sounds and still have the capability to pause and got back at certain points, was the best thing at the time. Stickland could set a mood easily with the visuals and sounds without the reader having to go through most of the poem to find out what the mood is. Errand Upon Which We Came, has visuals of flowers and butterflies as well as the sounds of birds which creates a calm and relaxing mood.

Genco Gulan
QR codes have been around since the smartphone became popular. QR codes store information that, when scanned by a smartphone, the user can read. This allows companies to create easy access points on advertisements so that passersby can go to the company’s website easily. Genco Gulan, a Turkish conceptual artist, created a poem using two letter words from different languages and then converted it into a QR code. As the artist believes in a feature that relies heavily on technology, this could represent how he believes that poetry will be presented in the future; as a tiny square that can be scanned on the go. (And since I don't have a smartphone, I don’t know what the poem says or if it has anything to do with the fact that it is contained in a QR code)